Mole verde may not be as popular as mole poblano, but it’s especially delicious in these chicken tamales!

Almost every single time I prepare tamales, I try to share the play by play on my Instagram stories. I have to remind myself that there are new followers daily and even though I repeat a lot of what I do, there may be a new follower. My goal is to try and inspire followers to attempt the recipes in their own kitchens. Yes, they can be intimidating, but they are doable. This was my first time preparing a mole verde chicken tamal. Delicious! Definitely would prepare them again.

As a food blogger, the summertime is when I am developing new recipes for the fall and holiday season. It’s the best time to test out new tamal recipes, why not? There’s no pressure and I could take as long as I want. You are going to laugh at me when I tell you that I developed this recipe at the end of last summer and I am just posting it now!! Oh boy! Lol! My life was interrupted with major surgery and my first cookbook! For some, they can only enjoy tamales during the holidays. Why?? If I get the craving, you are going to see me whipping out my steamer pot. Most times, I am only preparing about two dozen tamales. I share with friends and they’re gone.

You think you know everything? Not possible!

I once heard a quote that really struck me. The quote is, “If you think you know everything, then there is no more room for you to grow.” So true! How can one possibly know everything when it comes to recipes? Even recipes that we may prepare over and over again can be adapted in various ways. What works best for me may not necessarily work for another person. Spreading the masa with a spoon works great for me and that’s how I learned from my parents. Others prefer to use a butter knife or plastic masa spreader. My goal this season is to teach myself to use the plastic masa spreader. There is a little more counter space in my kitchen now. The moral of the story is that we should always be open to learning something new.

Stand mixer or by hand?

I grew up watching my parents mix 20 pounds of masa by hand. Those were just tamales for the family during the holidays! Lol! When my parents had their small restaurant, my dad would use a commercial size stand mixer to mix up to fifty pounds of masa! Before I purchased my stand mixer, I mixed the masa by hand. Five to six pounds of masa is what I would prepare most times. It was challenging at times because I have problems with both my wrist. You can imagine my relief when the stand mixer came into my life. I fell in love! Never had family near to help during tamal season, so I am used to doing it alone. Break it down into several days and it works great!

Natural rendered pork lard is going to give you masa more flavor! Some are not fans of the flavor and prefer to use the lard that comes in a block, it’s white. I remember that lard very well. It’s inexpensive and what my parents used when preparing large quantities of masa.

The stand mixer made my life easier! Look at it as an investment. Tools that will last as long as they are used properly.

Mole doesn’t always have to be so complicated!

Mole verde with shredded chicken or pieces of chicken slowly simmered is quite delicious! I don’t understand why more people are not fans of mole verde. Are you into the more traditional looking mole poblano? My goal this tamal season is a hearty mole poblano recipe to share with you all. Stay tuned!

Deli sheets or no deli sheets?

It’s not what I grew up with for sure. The tamales will still be delicious without the use of deli sheets! Look at them as a tool that is optional. Personally, I do enjoy the results when I use the sheets. For example the mole verde had a lot of sauce. Wrapping them with the paper, kept the sauce from going all over the inside of the steamer pot and gave the tamales a nice shape. 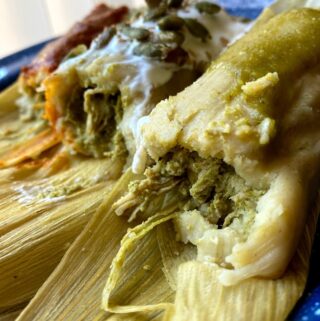 When it's not the holidays, that's when I like to experiment with new tamal recipes! It was close to September 16th, Mexico's Independence Day and I had prepared some chile mole verde. Tamales it was! Sooo tasty!
No ratings yet
Print Pin Rate
Course: Main Course
Cuisine: Mexican
Prep Time: 1 hour
Cook Time: 1 hour 30 minutes
Resting Time For Masa: 6 hours
Total Time: 8 hours 30 minutes
Servings: 30 Tamales

Here is a great tip for you to add more volume to your masa! Instead of mixing in the broth and lard when it’s hot or warm, let them cool! I discovered this a while back. By adding and mixing in cool, the masa will be more fluffy in a short amount of time. Mom used to mix everything hot and she would spend a long time mixing that masa by hand until she felt it was ready. If your using the stand mixer, even faster, but on occasion, I still mix my masa by hand. It never fails me and it’s always delicious! Want to add more flavor to your masa? Combine about 10 cloves of fresh garlic to the pork manteca(lard) in a sauce pan. Heat on medium/low until garlic turns a light golden brown. Remove garlic cloves and let manteca cool before adding it to your masa recipe.
Tried this recipe?Mention @pinaenlacocina or tag #pinaenlacocina! 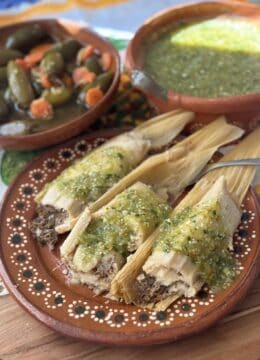 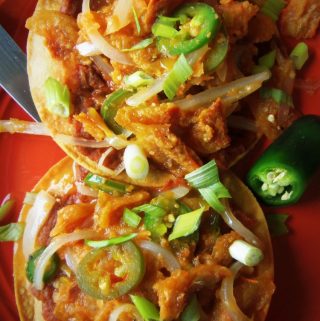 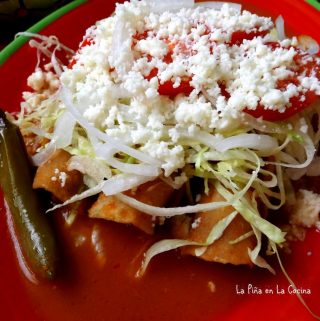 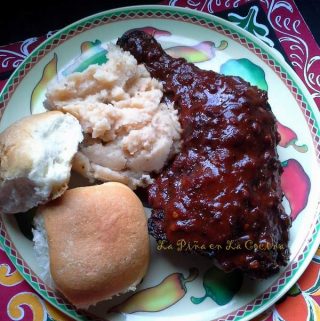 19 shares
MENU & SEARCH
We use cookies on our website to give you the most relevant experience by remembering your preferences and repeat visits. By clicking “Accept”, you consent to the use of ALL the cookies.
Do not sell my personal information.
Cookie Settings Accept
Manage consent