It’s either feast or famine when it comes to certain ingredients. This has been the case lately with my dried chiles. I love that I have so many that I am forced to create new recipes almost on a weekly basis. Richard’s(my better half) not complaining  either, lol! After experimenting with the recado negro last week in my Mole Negro recipe, I was anxious to create my own version. A recado is a flavor base that is  prepared with dried chiles, herbs, spices, garlic and vinegar. Most times it comes in a concentrated paste form and can be used for countless recipes. For today’s blog post I prepared a more liquid style recado. I am still itching to prepare the recado negro, but have to make sure it’s a day when I can open doors and windows for ventilation, ha, ha ha!! No, it won’t be that bad, I promise. Going to ease my way into that one. I prepared the guiso de pollo(shredded chicken) in the crock pot because it was so hot that day, no stove top cooking! It worked out very well, minimal fuss and we love that! This chicken recipe can be served in many dishes. Tacos, enchiladas, tostadas….You know where I am going with this. My favorite way is serving it up on a Mexican style birote or bolillo and drowning the sandwich in more sauce.  A Torta Ahogada. Mexico’s spicy version of the French dip sandwich. 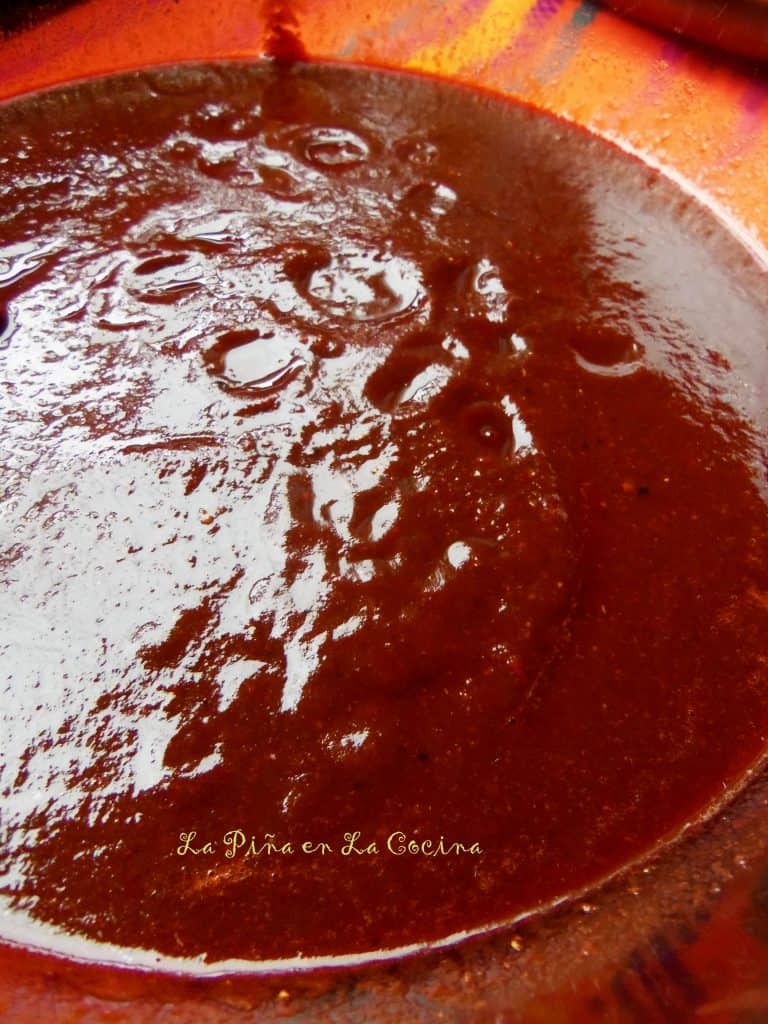 Tips~ The red version of a recado most often contains annatto, but I decided to leave it out this time.

1. Remove the stems and seeds from the larger chiles and only the stems from the chile de arbol if they have them.

2. Transfer them to a comal/griddle and heat to medium. As soon as the chiles become aromatic, take a metal spatula and press them flat onto hot surface.This will help char them a little quicker. Turn and repeat on other side. You want them to start turning black, but still have some red color. If they get too black and burn, they become bitter.

3. Transfer the chiles to a pot of simmering water and cook for 10 minutes. remove from heat and let them steep and cool.  On that same comal, add the cumin seeds, oregano, peppercorns, cinnamon, anise and clove. Toast for a few minutes, turning as needed. Transfer to a grinder or molcajete and grind until it looks like a powder.

4. Again on that same comal, add the garlic with skins on and cook and char for 15 minutes, turning as needed. Remove from heat and let cool.

5. Using a slotted spoon or tongs, add the chiles to the blender. Also add the ground spices. Remove skins from garlic and add them. Finally add the vinegar, broth,  and salt to taste. Blend on high until smooth. Strain through a wire mesh strainer. Taste for salt. This is a liquid version of the usual store bought recado, that I buy, which most times looks like a paste. Recado is ready to use for a marinade, sauce or flavor base for soups and stews. The longer it sits, the more flavorful and concentrated it will become. 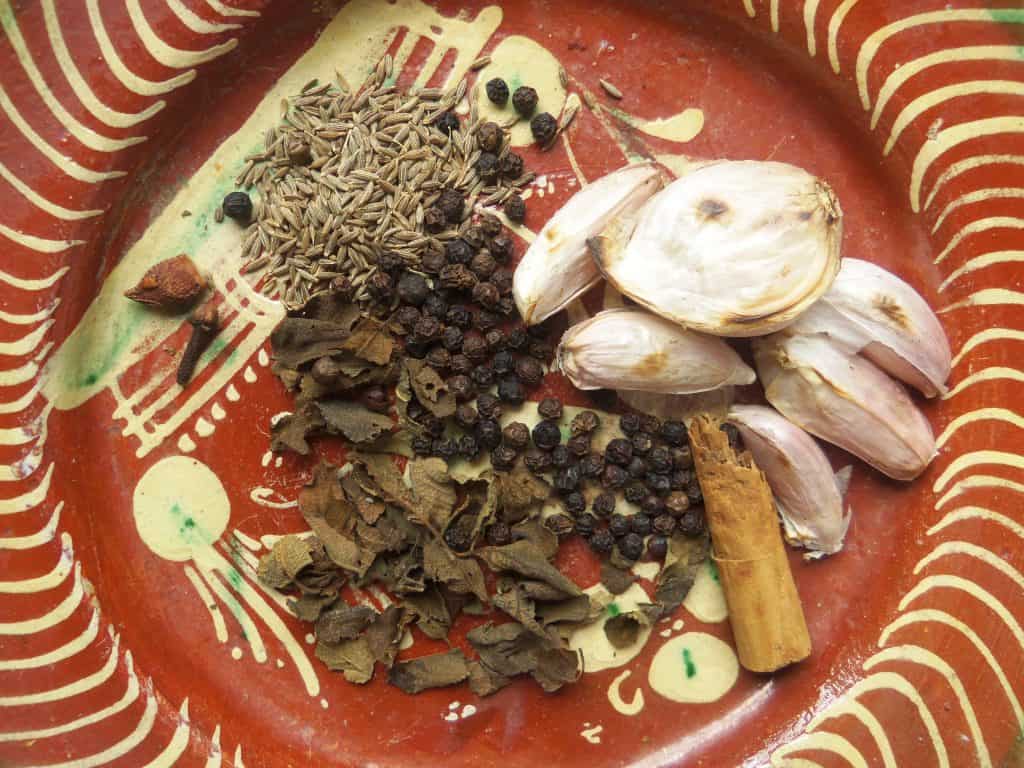 Tips~ Not into whole spices, that’s ok. Previously ground spices would work. But if you have the chance, you should try toasting and grinding your own. The flavors are amazing. If using ground, you would use only half of the amount listed. And just a good pinch of cinnamon. 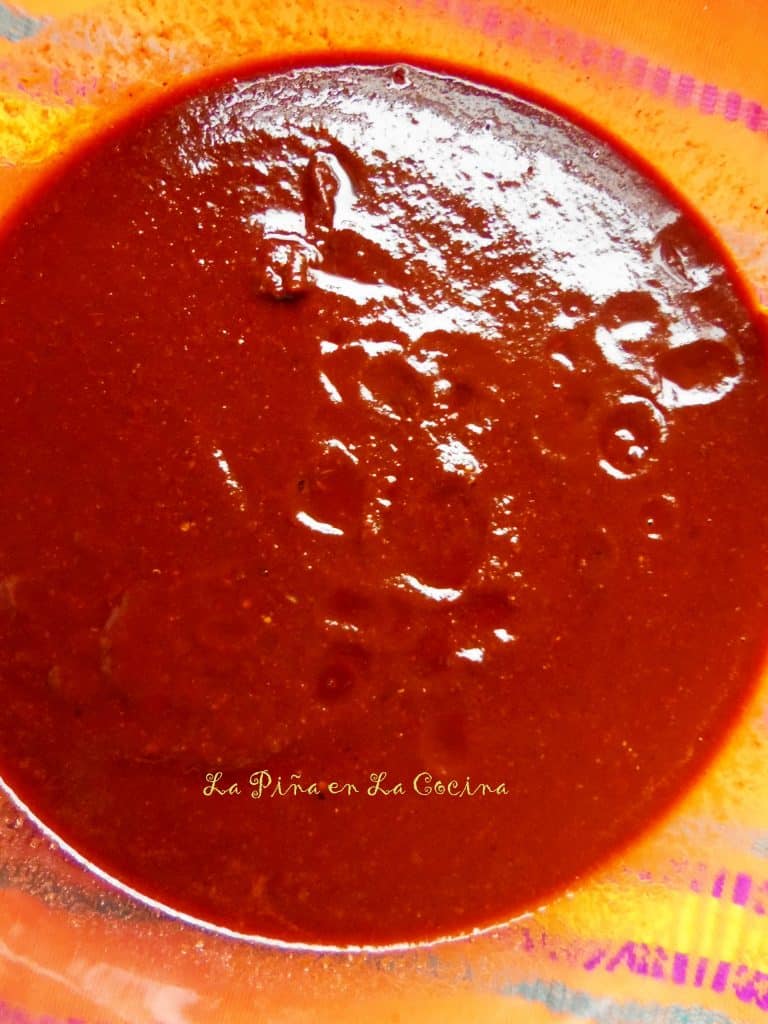 Tips~ If preparing a Recado Negro, I would char the dried chiles in some hot oil until they were mostly black and follow the exact directions as listed above. I will be sharing that recipe very soon! 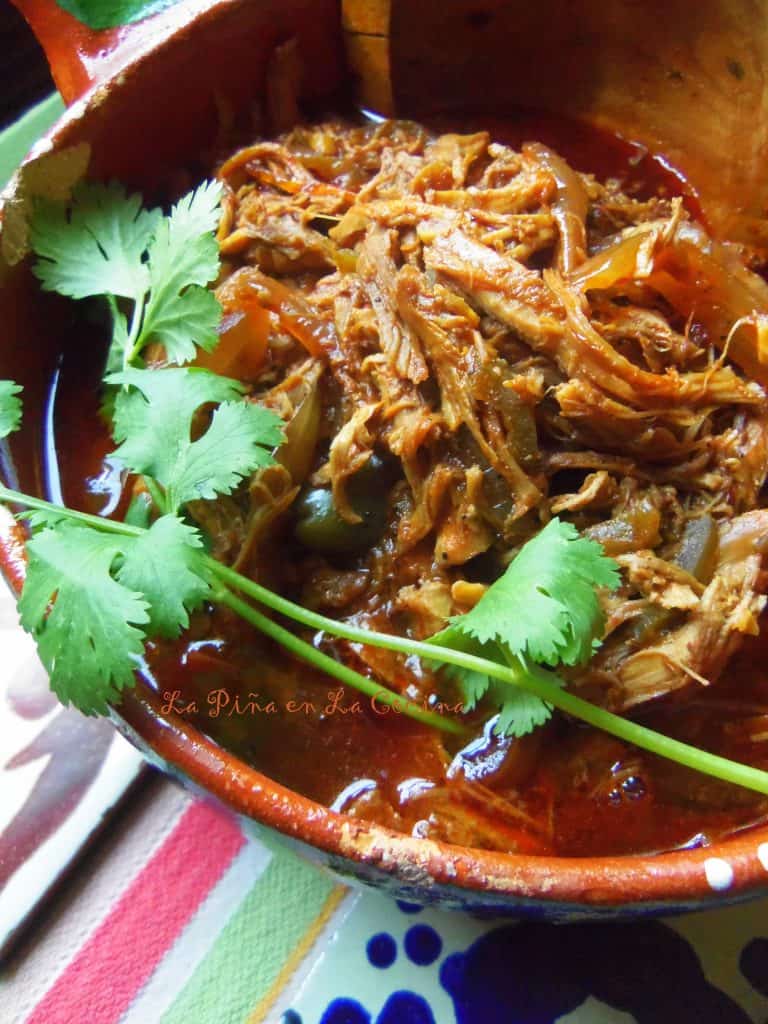 Tips~ If you wanted to, you could layer all of the ingredients in the crock pot, cover and marinate overnight. Let it come to room temperature for 25 to 30 minutes before cooking.

1. Season the chicken with salt, pepper and garlic powder on both sides, set aside. In the crock pot, add the onion, jalapeños and garlic. Season with salt and pepper. Drizzle with olive oil.

3. After the fourth hour, remove chicken from crock pot and using two forks, shred the meat. Add the meat back to crock pot, along with  1/2 cup of reserved recado sauce.  Store the remaining recado for different recipes. I will be sharing those recipes in the next week or so. Stir well to combine, cover and continue cooking for another hour. Taste for salt and pepper. Yields up to 8 servings 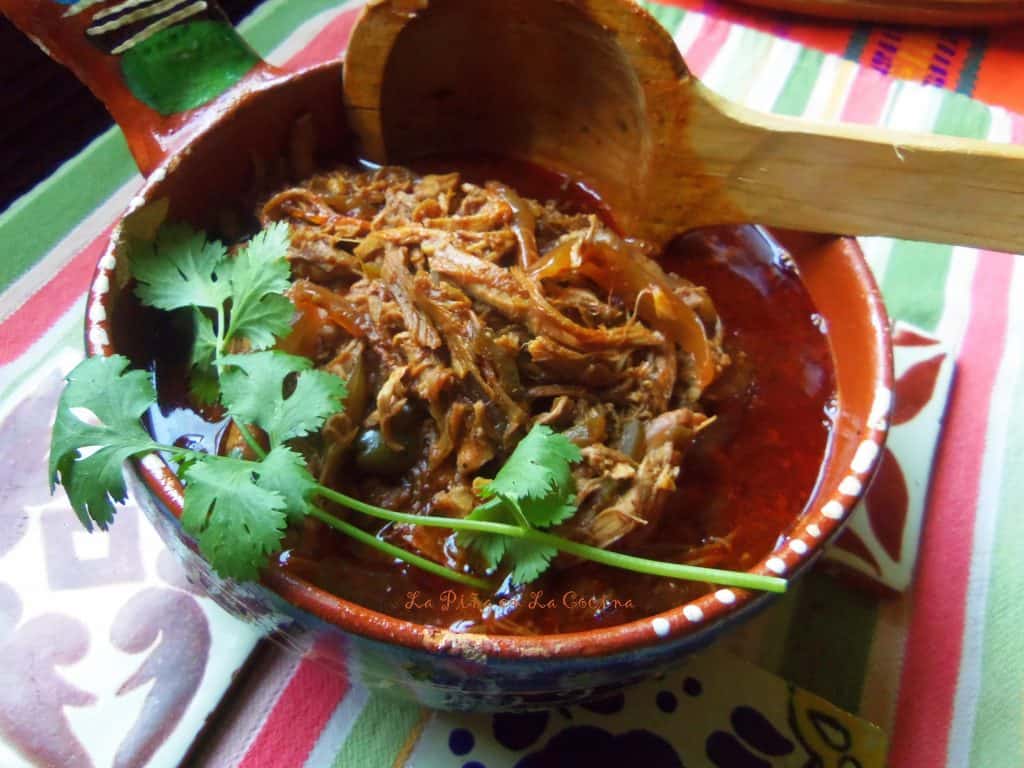 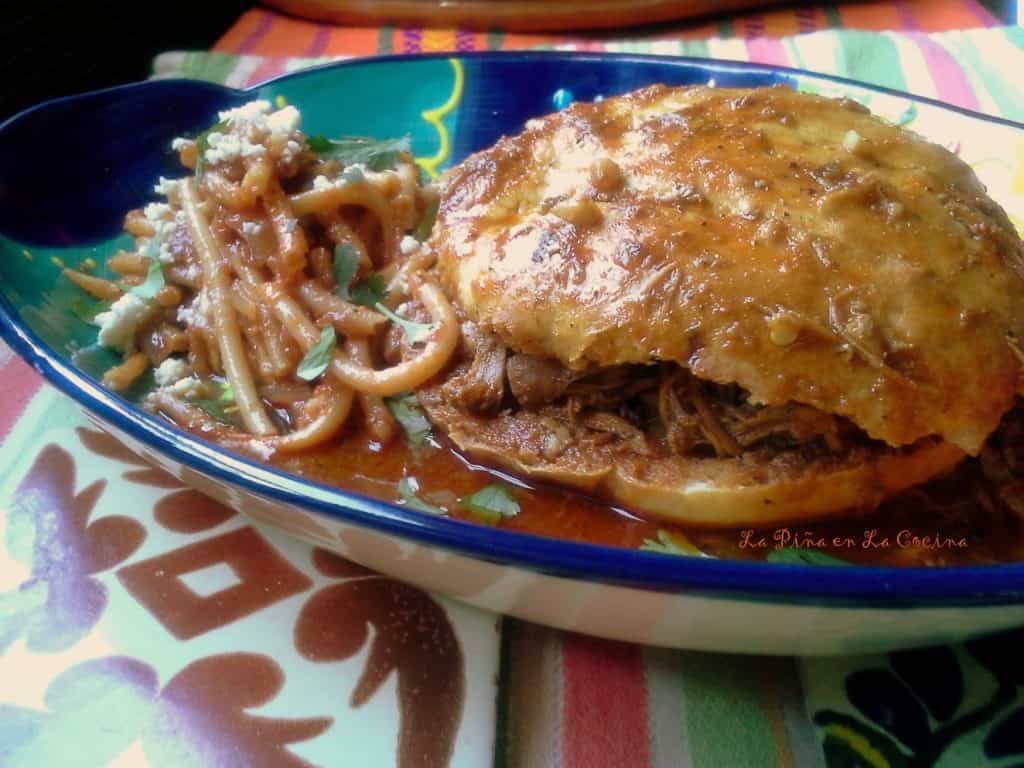 Once you have prepared you Guiso de Pollo, you can also prepare this delicious chicken version of a very popular Mexican sandwich. Torta Ahogada, which literally translate to “drowned sandwich”, is most popular in Jalisco, Mexico. The chile sauce in this recipe is much more mild than you would typically find in an authentic recipe. But, of course you can bump up the number of chile de arbol added to sauce if you prefer it much spicier. All you need for a Torta Ahogada is some good rolls, Mexican birote or bolillo style rolls. Layer some fresh avocado with the Guiso de Pollo, extra recado sauce. Ladle some of the warm recado sauce from chicken on top of the torta. Garnish with radishes, pickled jalapeños and onions. 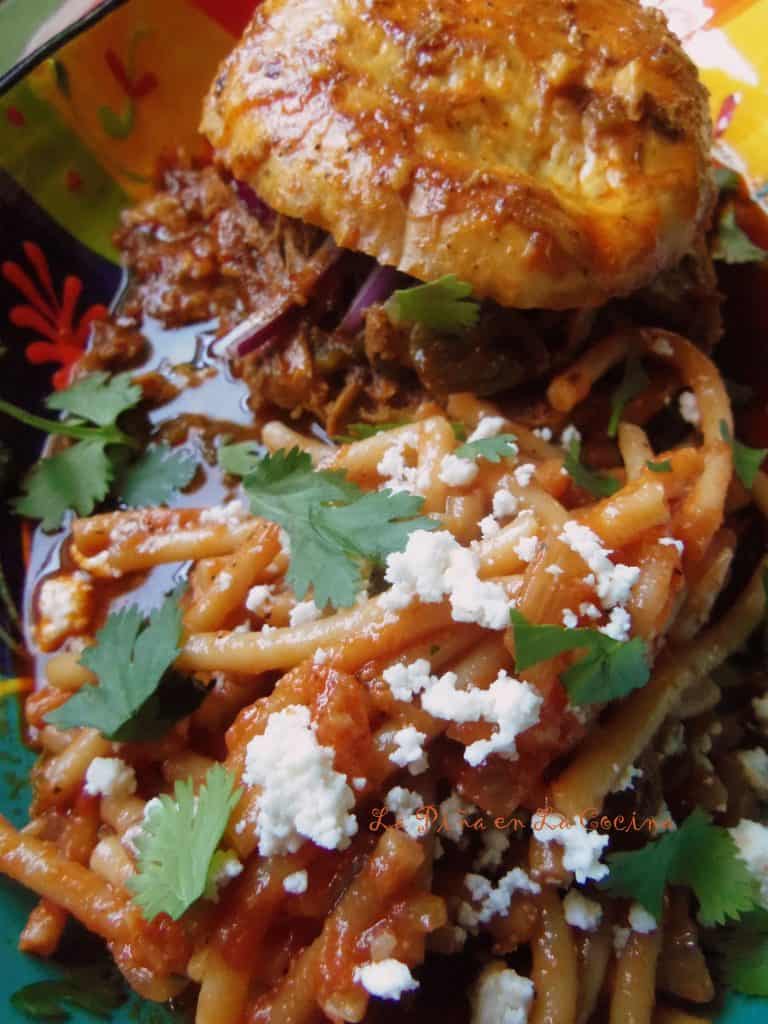 Torta served with a little fideo on the side. 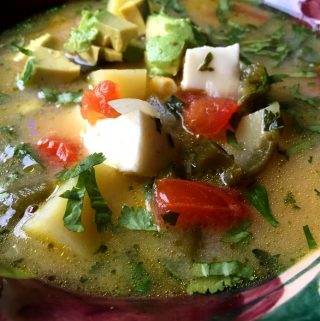 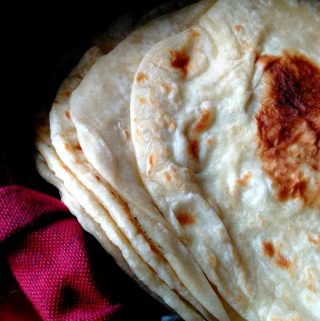 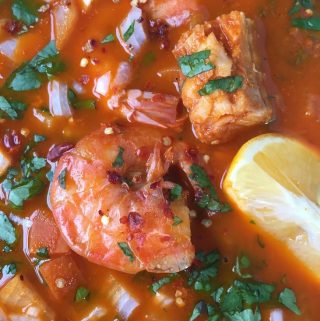 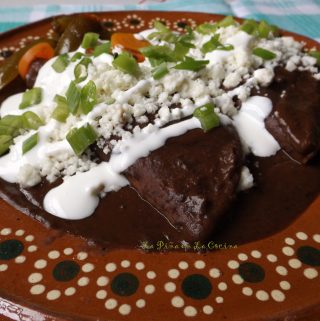 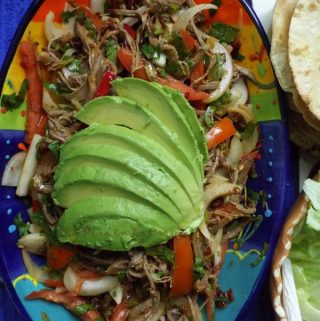